Mehrangarh the Fort of Jodhpur crowns a rocky hill that rises 400 feet above the surrounding plain, and appears both to command and to meld with the landscape. One of the largest forts in Rajasthan, it contains some of the finest palaces and preserves in its museum many priceless relics of Indian courtly life.

For over five centuries Mehrangarh has been the headquarters of the senior branch of Rajput clan known as the Rathores. According to their bards, the ruling dynasty of this clan had at an earlier period controlled Kanauj (in what is known as Uttar Pradesh). Like other prominent medieval Rajput rulers – including the famous Prithviraj Chauhan – they were defeated by the invaders from Afghanistan at the end of the 12th century. This catastrophe led to the disruption and migration of the early Rajput clans that they led. The Rathores came to Pali, in Marwar, in what is now central Rajasthan. It is claimed that they were to settle there to protect Brahmin villages against cattle-rustling local tribes. The story may seem somewhat fanciful, but the protection of the priestly caste in one of the traditional roles assigned to the Rajputs. Their task in Pali was the basis of their expanding power in the region.

Rao Chunda (r. 1384-1428), the twelfth Rathore to rule in Marwar, established his capital at Mandore, which he had acquired as a part of a dowry. Two generations later, Rao Jodha (r. 1438-89) began to build a fort at a new site six miles to the south, on an isolated rock with a higher elevation and better natural defences. Jodhpur, the town that sprang up at its base, was named after him. The fort was named Mehrangarh, meaning ‘fort of the sun’ – a reference to the clan’s mythical descent from the sun god Surya. Over 500 yards long, its wall rises in places to a height of 120 feet and is 70 feet thick.

For Rao Jodha’s successors, these defences were essential, though not always adequate. The centuries following the fort’s foundation were marked by rivalries between the Rajput clans and by other external threats. A dominant influence over the region was asserted first by the Delhi Sultanate and later by the Mughals. As they built their empire in India, the Mughals sought to subdue Rajput states like Marwar and its neighbours in Rajasthan, but they did not wish to eradicate them. To most established Indian rulers they preferred to offer terms of subsidiary alliance: serve the empire, they said, and you can retain control over your ancestral lands. Four successive generations of rulers in Marwar, between 1581 and 1678, accepted this challenge and became loyal allies and in effect feudatory chiefs of the empire. But for decades both before and after this phase, the understanding with the Mughals broke down, the city and fort of Jodhpur were overrun, and the Rathores were reduced to guerrilla-style resistance in their own kingdom. It did not make matters easier that their relations with the bordering Rajput states such as Jaipur and Bikaner also tended to be volatile.

In those unstable times, a fort like Mehrangarh was an object of great power and prestige; in today’s terms it would be rather like owning an aircraft carrier. Its uses, perhaps, were somewhat more varied; it was not just a military base, but also a palace for the rulers and their wives; a centre of patronage for the arts, music, literature; and with its many temples and shrines it was also a place of worship. These diverse uses are reflected in many buildings within.

The current head of the Rathore clan and custodian of the fort, Maharaja Gaj Singh II, has preserved the buildings and developed the museum as a record of the lives of his predecessors. His ancestors ruled the state of Marwar and over many generations built this architectural treasure, and it falls to him to ensure that their legacy is maintained and understood. 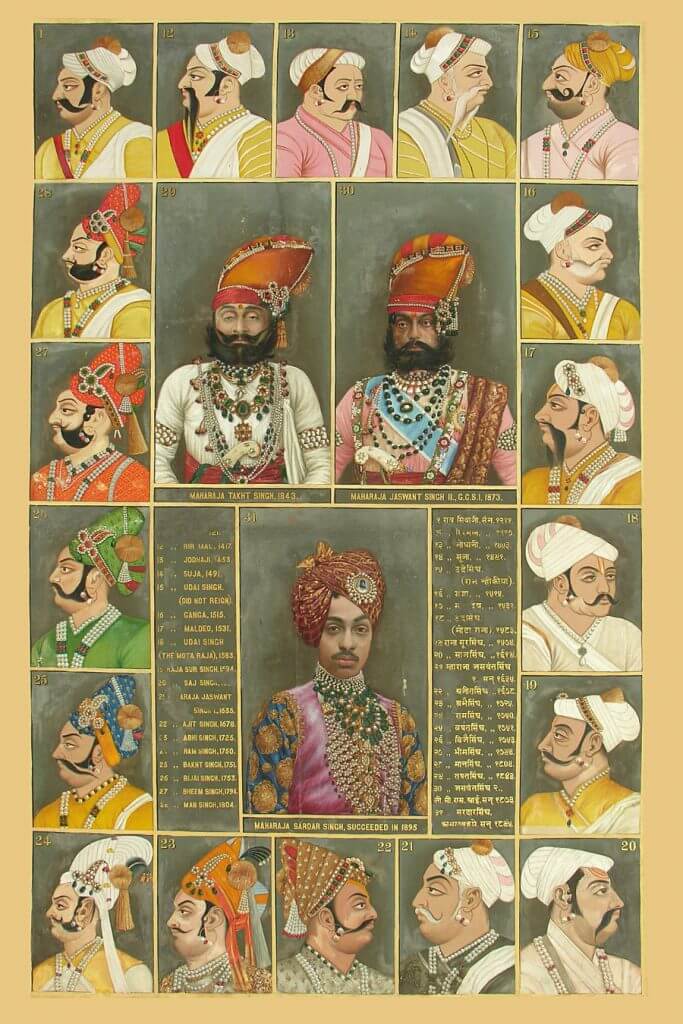