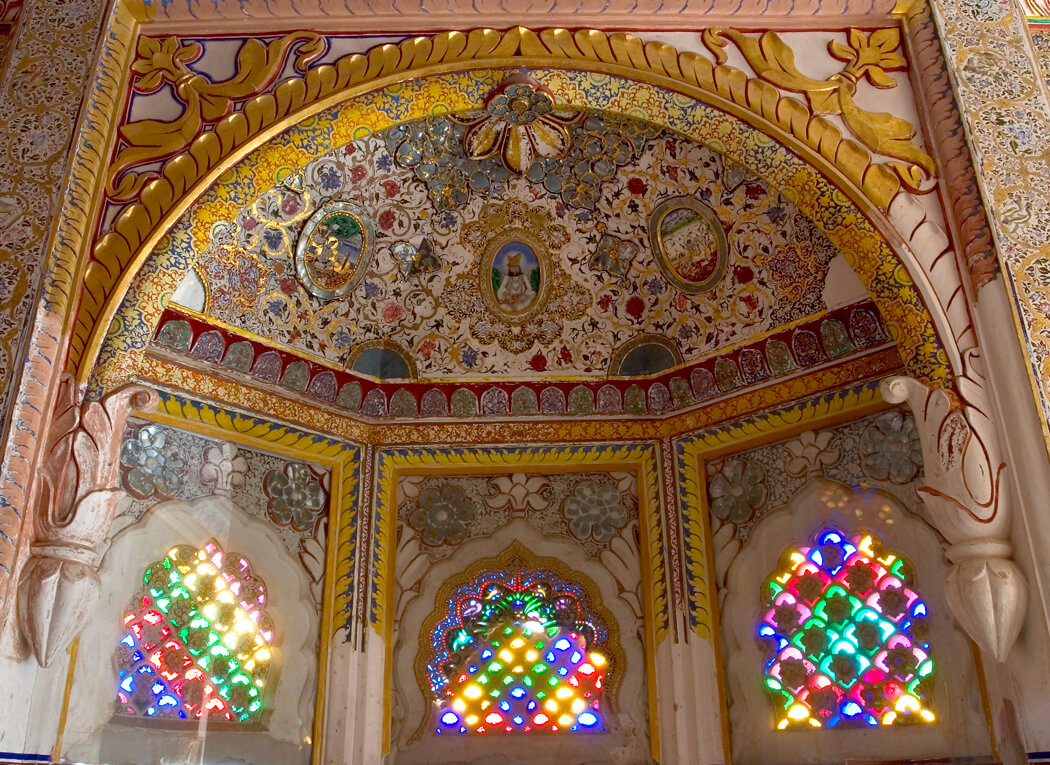 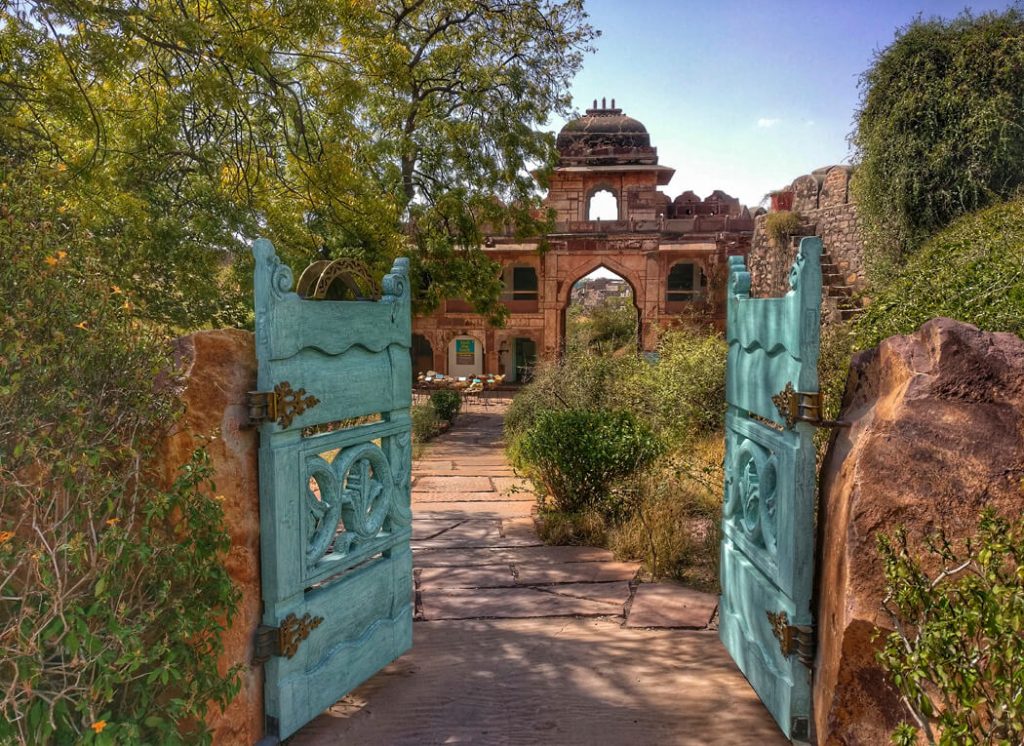 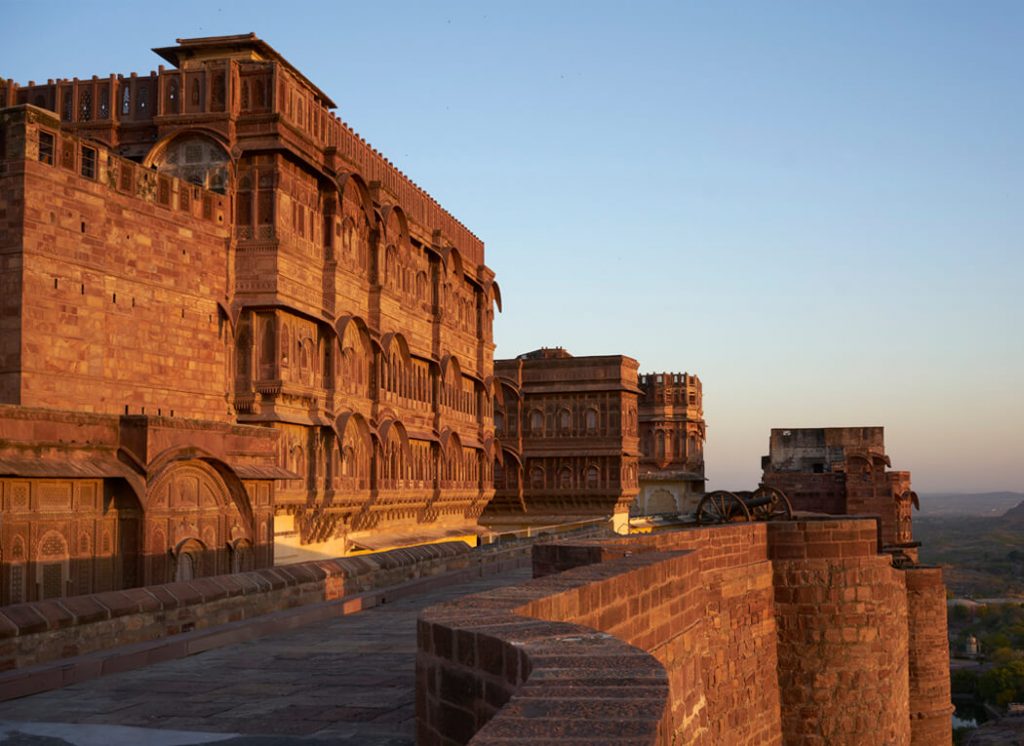 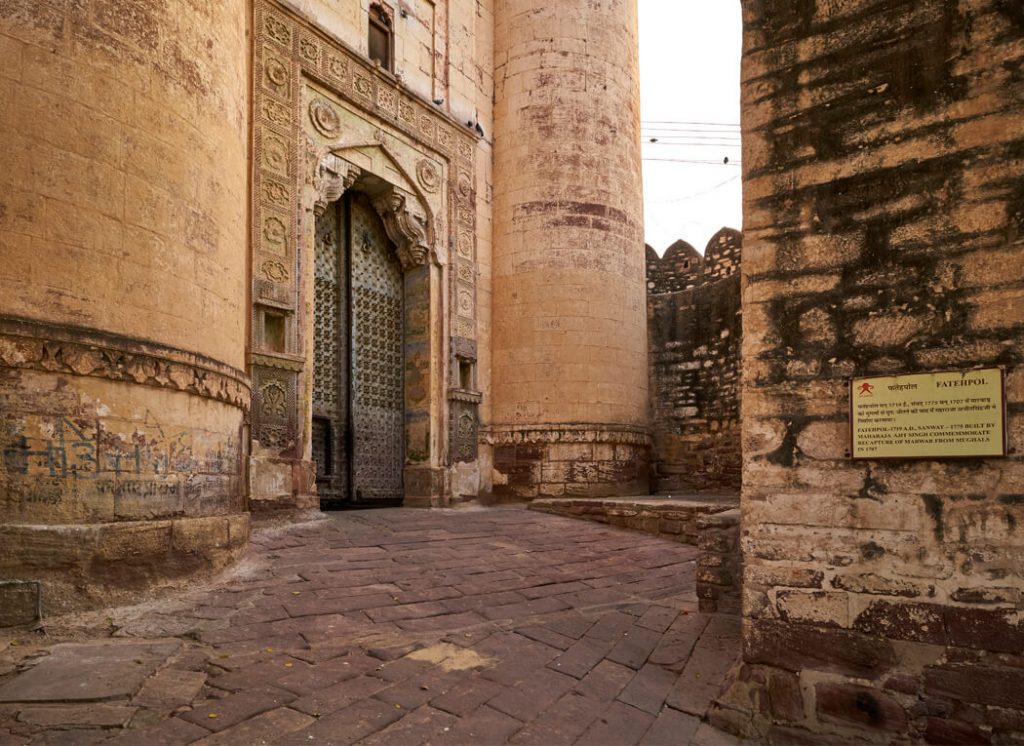 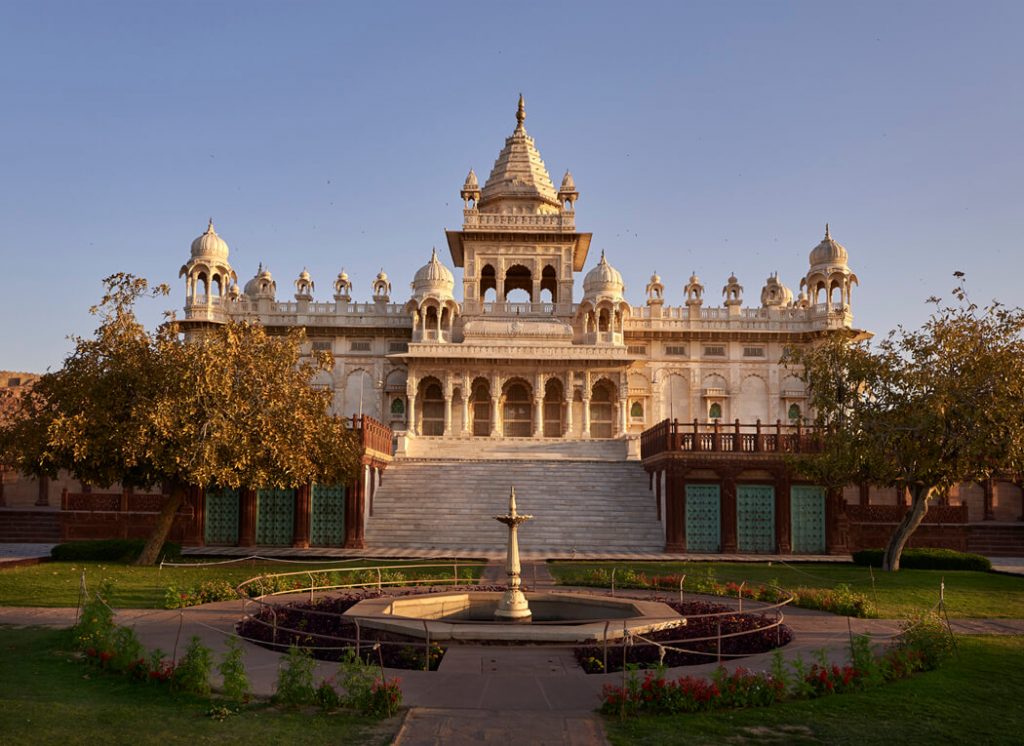 Taste the adventure of flying across the length and breadth of Ranisa lake and the hillocks around the Mehrangarh Fort. Ticket : Jai Pol Ticket Counter, Mehrangarh Fort 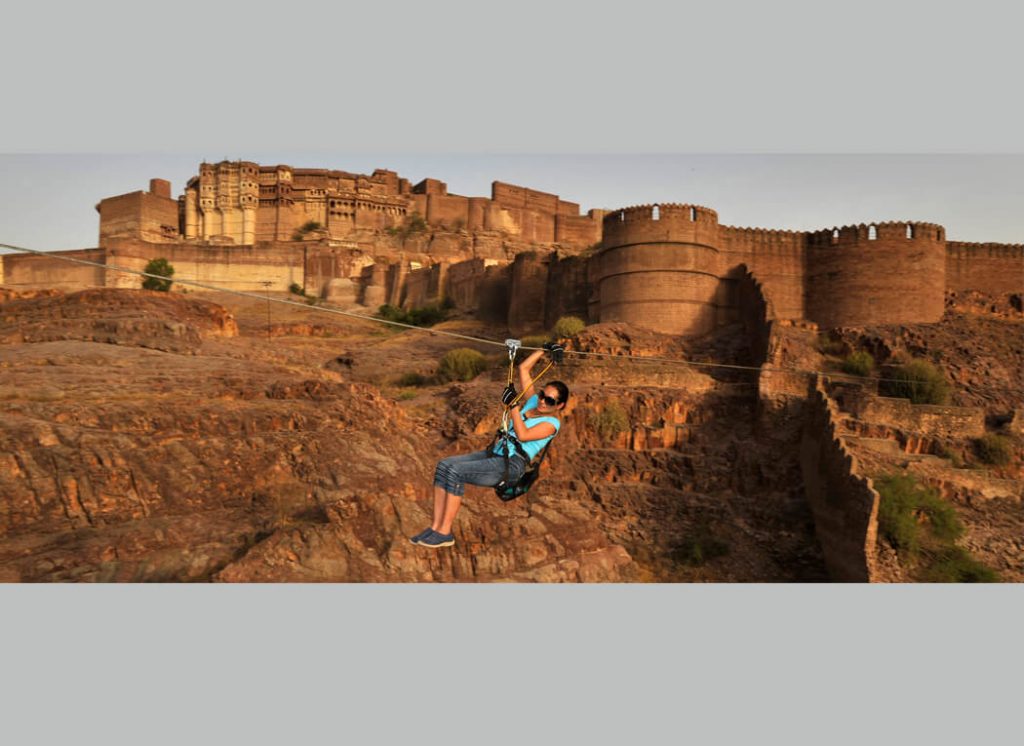 Taste the adventure of flying across the length and breadth of Ranisa lake and the hillocks around the Mehrangarh Fort. Ticket : Jai Pol Ticket Counter, Mehrangarh Fort

On leaving the café, turn right and continue past both the Suraj Pol (the entrance to the museum) and the steps leading up to the zenana gate (the museum exit). A little beyond these steps the ramp begins to rise more steeply. Above you to the right at this point there is the exterior of the fine carved screen enclosing the courtyard of the zenana temple. Climbing the steps to your left takes you up onto the gun terrace. The ordnance displayed here is a mixture: many of the guns were made in the 19th century for the British (their barrels are inscribed with Arabic names but also carry English coats of arms). Other pieces are of earlier Indo-Muslim production. A few pieces date from the First World War.

From the edge of the ramparts you have a view over the fort wall and the city. Immediately below you, adjoining the fort wall, is an unfinished bastion. It was the intention of Abhay Singh (mid 18th century) to raise another terrace, an extension to the one where you are standing, but the work was left incomplete. Further away, to your right, within the city, can be seen Sardar Market, with its tall clock tower and shop-lined open space that was laid out in the early 20th century. To the left of this is the Gulab Sagar (‘rose lake’), a tank built for public use and financed by Gulab Rai, a paswan (concubine) of Vijay Singh, in the late 18th century. In the middle distance on a hill directly in front of you is UmaidBhawanPalace, built in 1929-44 by Umaid Singh.

It might strike one as odd that the guns should directly overlook the city. The explanation is this. The old city of Jodhpur shelters against the western side of the fort; and this gun terrace along the eastern side originally overlooked farmlands and open terrain. The city you see below from here has grown up since the mid-19th century, and this was a time of peace. The last serious assault on the fort was made in 1809 (by Jaipur). In 1818, Jodhpur and the other Rajput states that neighbour it all signed treaties with the East India Company, the terms of which put an end to their rivalries; and the political settlements that followed the 1857 Rebellion endorsed this general Pax Britannica. Most of the guns on the terrace date from after the mid-19th century, and consequently have never been fired in anger. Their presence is symbolic and reassuring, their actual use restricted to firing blanks as gun salutes to visiting maharajas and viceroys.

Following the ramparts towards the south, you enter a narrow passage that leads to the Chamunda Mata temple. This is a 16th-century building, but it was severely damaged by an explosion in the fort and rebuilt by Takhat Singh in 1857. That was the year of the Rebellion, the revolt against East India Company rule that spread through much of north India. Some of the nobles of Jodhpur were inclined to back this uprising, but Takhat Singh revealed his allegiance by giving sanctuary to a party of Britons who were fleeing from Ajmer, and sending troops against rebels from the garrison town of Nasirabad. He then withdrew to his lakeside resort at Balsamand. Even at that distance (four miles) he heard the explosion in the fort, and feared that it was under attack from rebel sepoys. In fact, lightening had struck the magazine. Many buildings at the southern end of fort were damaged, the temple among them. The repairs respect the original design. The temple is among the active places of worship in the fort, regularly visited by members of the former ruling family and other worshippers. The terrace in front of the temple affords a view of the rocky landscape at the fort’s southern tip.

Finally you come to the small Murli Manohar (Krishna) temple, built in the form of a haveli or courtyard house. The door in the centre of its outer veranda leads into a small courtyard, with the shrine beyond. It was built in 1759 by Maharaja Vijay Singh (a devout Vaishnavite). From here it is a short walk back to the café.

WALK 2: THE WESTERN SIDE

From the café, turn left and take the path down through the top two gates, Loha Pol and Amriti Pol. Then, instead of taking the sharp right turn towards Jai Pol, continue down the ramp; a dog-leg bend brings you to the front of the Chokhelao Mahal.

From the outside this small palace looks like a traditional town house, with a veranda sheltering a strong entrance doorway. Inside too, it follows the typical house layout: a central courtyard with a one large hall at far end, and smaller rooms along the other two sides. It is all single-storey, but there is a staircase that gives access to the roof, which could be used as a terrace. Much of the building is elaborately painted, especially the walls of the courtyard and the interior of the hall. The hall and roof both give views of an extensive garden laid out on lower ground beyond. Recently restored, this garden is also worth exploring.

The Chokhelao Mahal is a zenana palace, built for Takhat Singh, whose portrait appears in one of the murals on the outer wall (to the left of the entrance).

On leaving the Chokhelao Mahal, cross the ascent ramp into the open ground that lies under the fort wall and rock. Parts of the rock face here have been scarped, or cut into a vertical smooth wall, to make it impossible to scale. At the southern end of this area, a short flight of steps leads down to a Shiva shrine, next to a kunda (tank) and a little garden: a restful and quiet spot. Nearby, another flight of steps leads down to the ascent ramp, which we here rejoin. Continue down until you reach the lowest gate, the Fateh Pol, the outermost entrance to the fort, built in the early 18th century by Ajit Singh.

From here, leave the fort, continue straight along the road ahead, and take the first main turning to the right. This brings you to the ghat or embankment of Rani Sagar (‘the queen’s lake’), which lies between ridges of rock just outside the main fort wall to the west. This artificial lake was named in honour of a queen of Rao Jodha (the probable builder) and was enclosed by an outwork on its western side, added by Maldeo. The beauty and solitude of this spot make the journey here worthwhile.