This Deccani watered-steel blade with a reinforced point for punching through armor and mail was made in the 17th century. However, it was mounted on this particular hilt in the late 19th century. The gold and silver figures of the 10 incarnations of the god Vishnu with a contrasting russet ground are also late 19th-century additions. 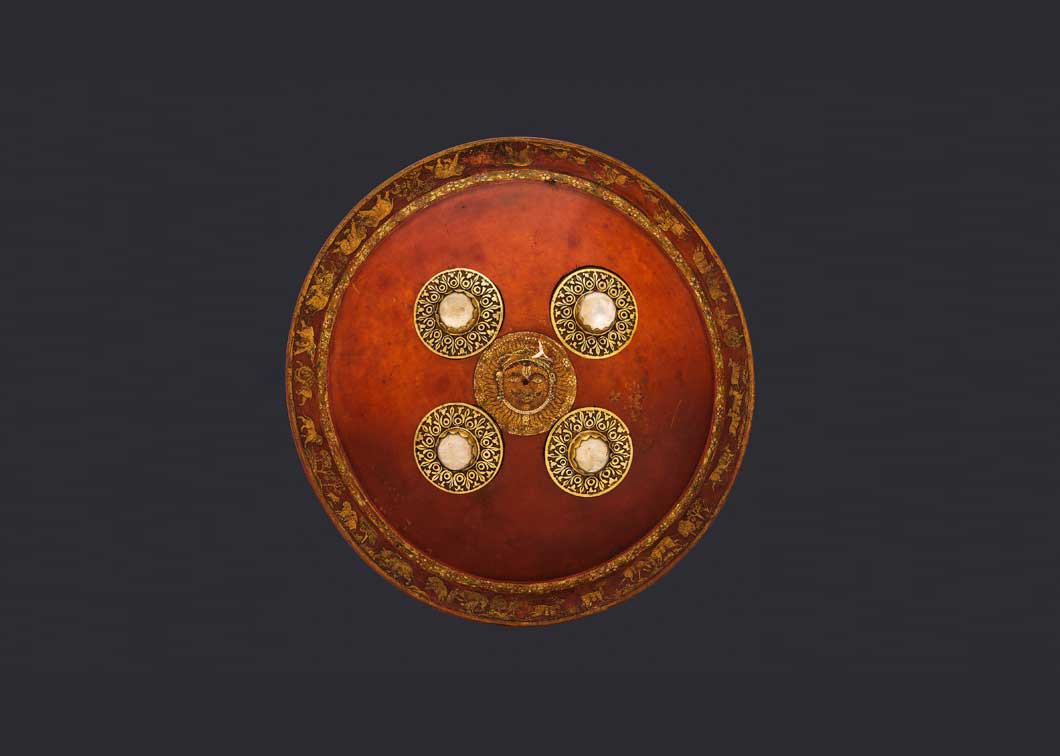 This leather shield, besides its size is also notable for the elaborate decoration, elaborate jeweled bosses and high quality painting. It dates from the period after the Mutiny of 1857. This was a period when the shield had become entirely redundant as equipment for a warrior but still served as a piece of decoration, as a symbol of rank and also as a tray on formal occasions involving kshastriyas. In the same period similar sized, highly decorated shields made of iron and steel inlaid with brass became popular. 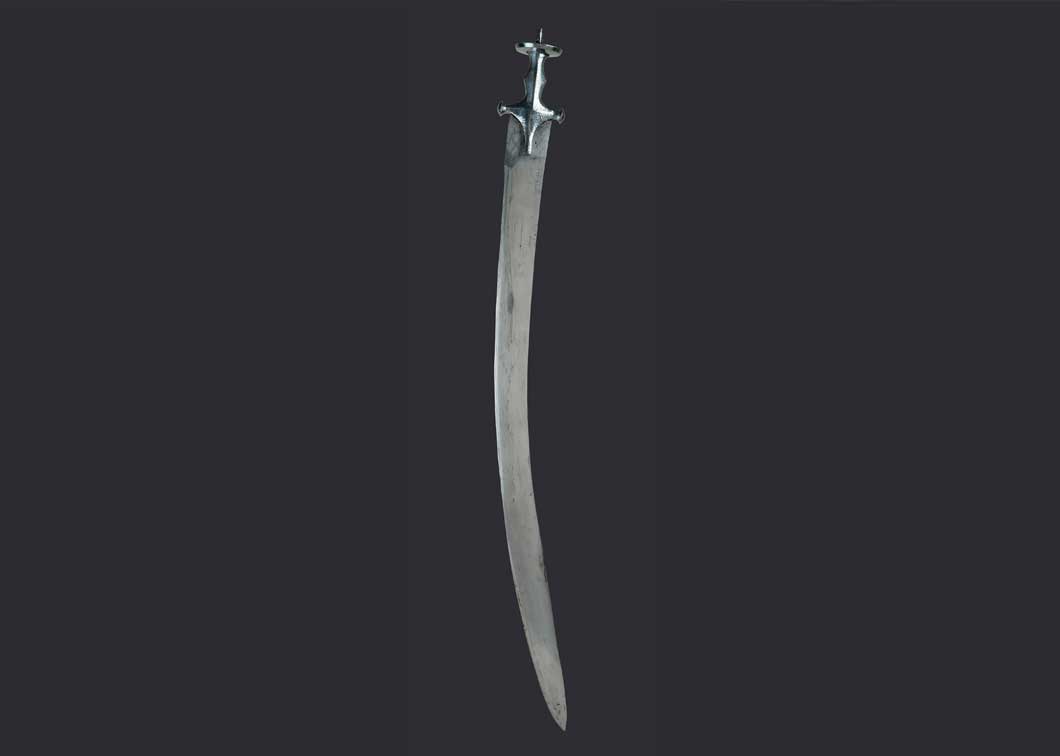 This massive sword possibly belonged to Maharaja Gaj Singh I (r.1619-38). The blades in the collection were abrasively cleaned in the 1970s and the original Marwari inscriptions which were lost were replaced with new ones. However a fragment of brown paper glued to the scabbard relating to the sword being displayed in the Edwardian period has the word Gaj Singh which suggests the attribution was believed at that period. The Maharaja lent pieces to the Delhi Durbar in 1911, the probable date of the label.

The blade has been reduced at the forte to fit the hilt which is therefore not original. The hilt with the ‘points’ in the centre of the grip is typical Marwar but the silver has been scraped off for scrap value. 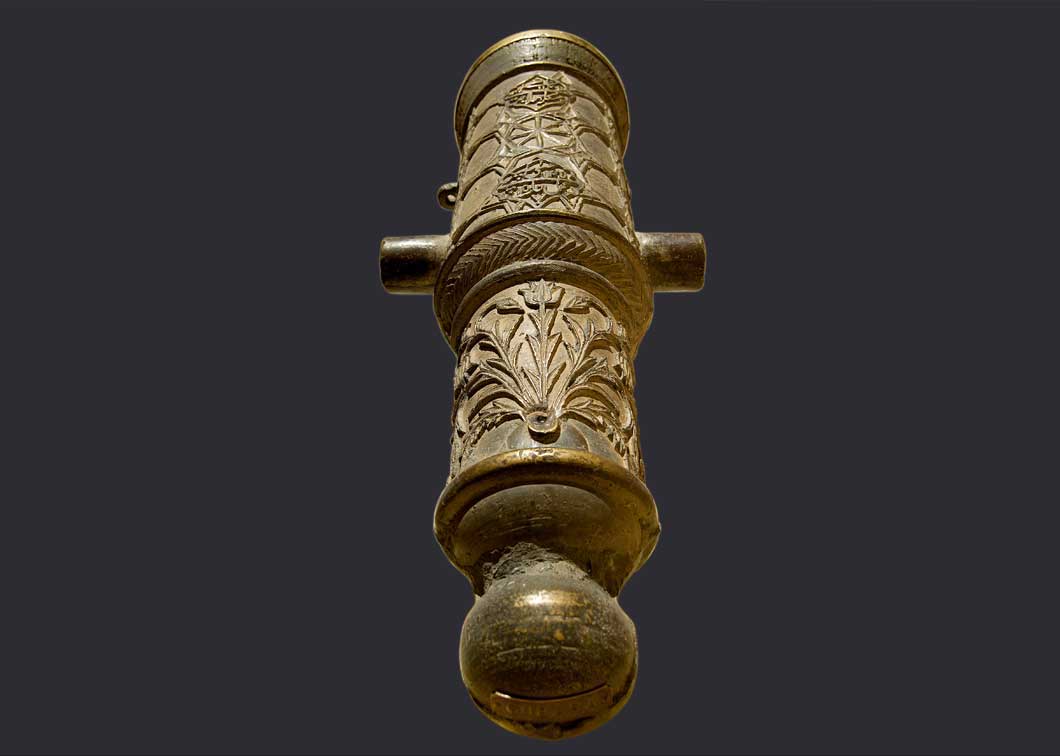 This cannon named Gubara (“fire-balloon”) was captured at Ahmedabad, the capital of Mughal Gujarat, by Maharaja Abhai Singh (r. 1724–49). Abhai Singh was appointed governor of Gujarat in 1729—a time when imperial authority over Mughal provinces was weakening. The deposed governor, Sarbuland Khan, refused to cede control, prompting Abhai Singh to storm Ahmedabad with his troops. As a sign of victory, this two-stage cast-bronze cannon was carried home to Mehrangarh. The Gubara is decorated with images of lilies and four-pointed stars forming a lattice-like design. Persian inscriptions note the name of its maker, Isa Beg, and the year of production, 1713–14. 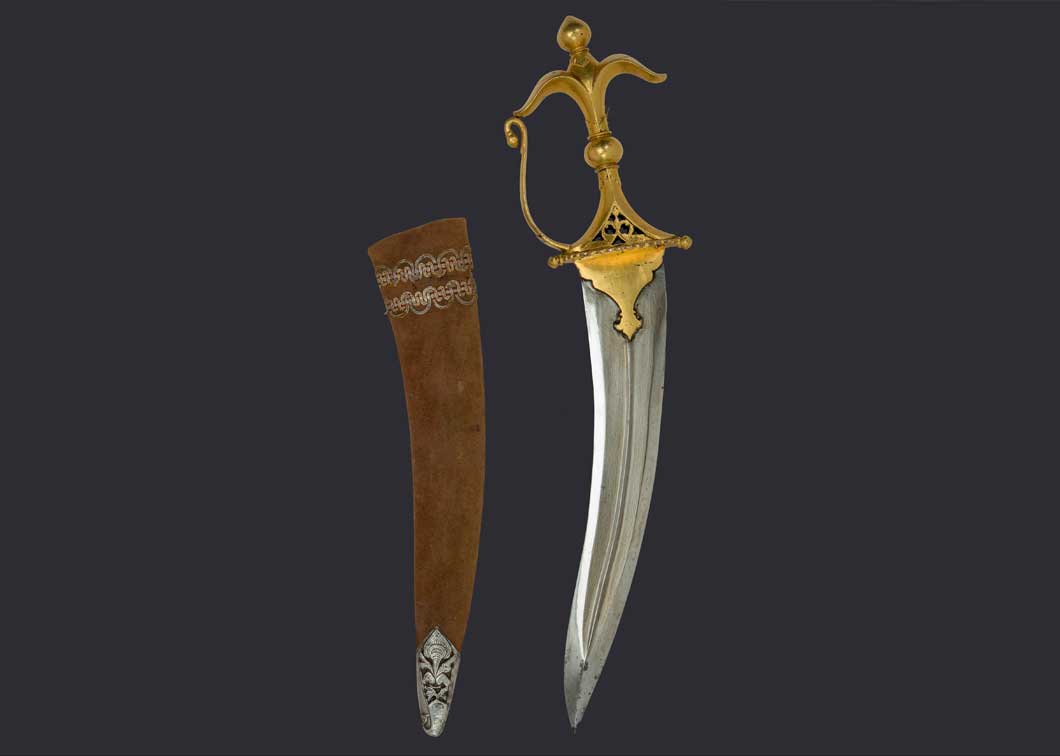 This 17th-century chilanum belongs to an evolving group of daggers with recurved blades and X-shaped hilts that were first created in the late medieval period. These daggers eventually became unfashionable; however, in the late 19th century, when collecting arms was very much in vogue, they were retrieved from armories across India, and the gold on the hilts was renewed so that they could be displayed at various exhibitions instigated by British authorities. Lord Curzon (viceroy, 1899–1905) was particularly concerned about rescuing traditional Indian crafts and presided over the 1903 Delhi Durbar, where he strongly advocated craft revival. Sindh 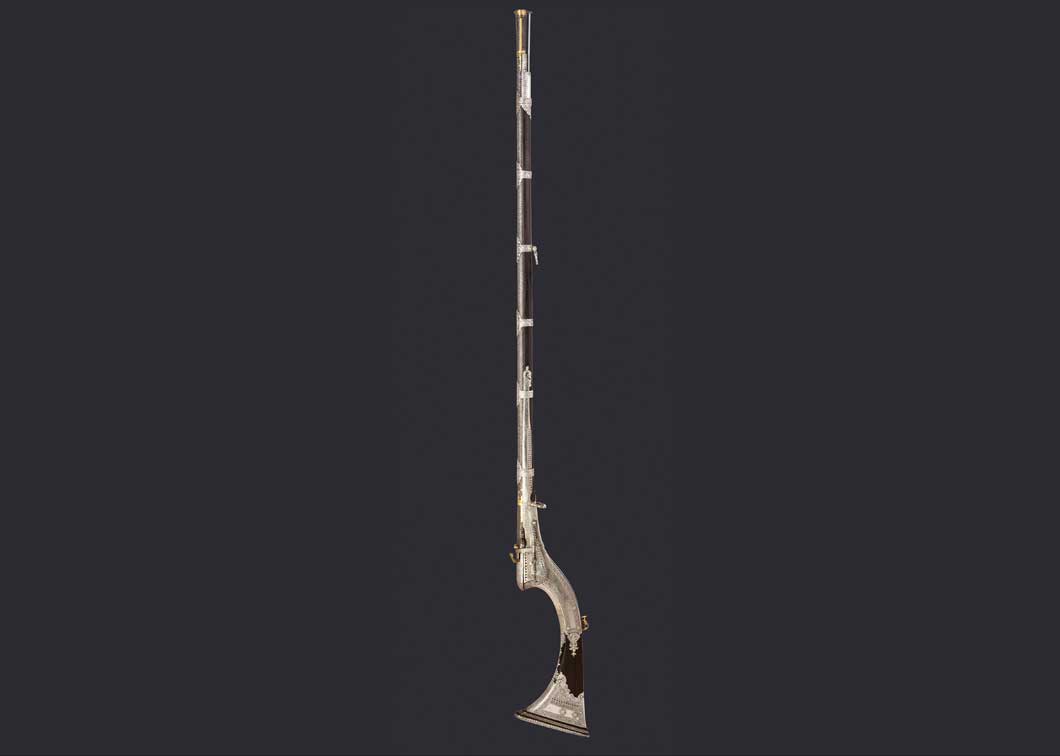 The matchlock’s Sindhi-rifled, Damascus-twist barrel features eight grooves and a flat sighting rib. The breech and muzzle have chiseling and koftgari work. There is a copper bead foresight and a valley back sight with sloping shoulders, mounted on a stock made of shisham. The barrel bands are possibly 19th-century replacements. The looped sling carries, still known in the modern Indian army as “secling currie,” have well-formed makara heads. The plain steel ramrod has a mushroom-head terminal, and the pierced trigger is gilt steel. 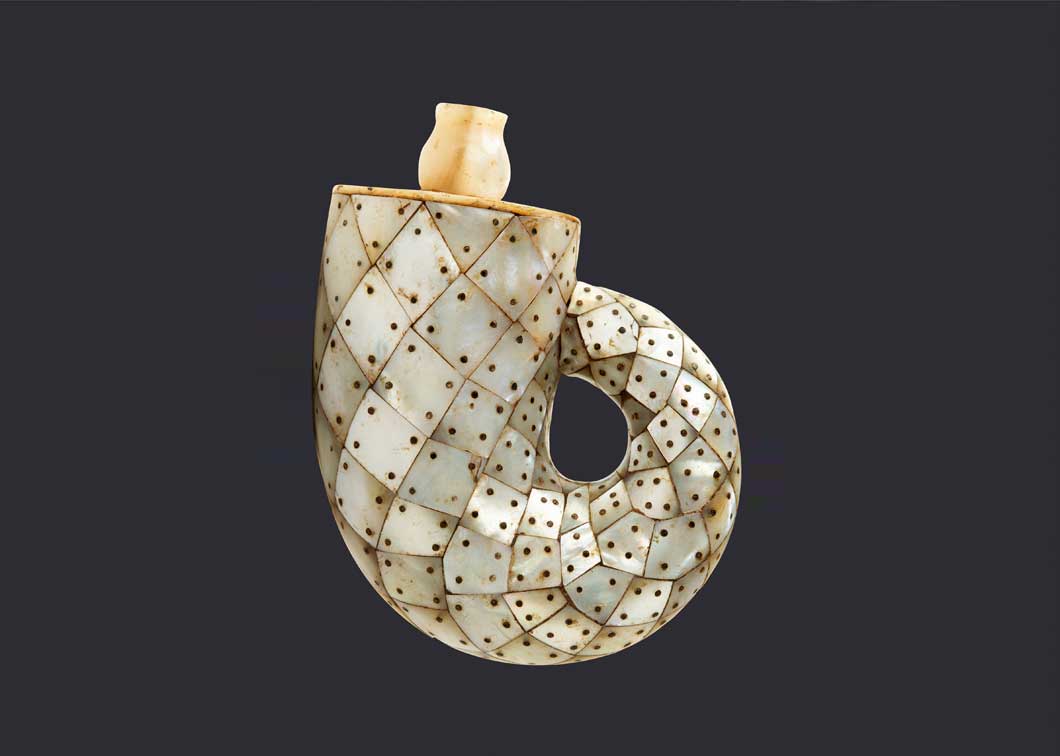 Items decorated in this manner include boxes, plates, and flasks. The flasks copy the shape of the standard leather-covered wood powder flasks used across the Islamic world that were derived from flasks made from horn. The shell comes from the green sea snail (Turbo marmoratus) found in the Rann of Kutch. These exotic, decorative items were very popular in Ottoman Turkey and found their way to cabinets of curiosities in the European courts. 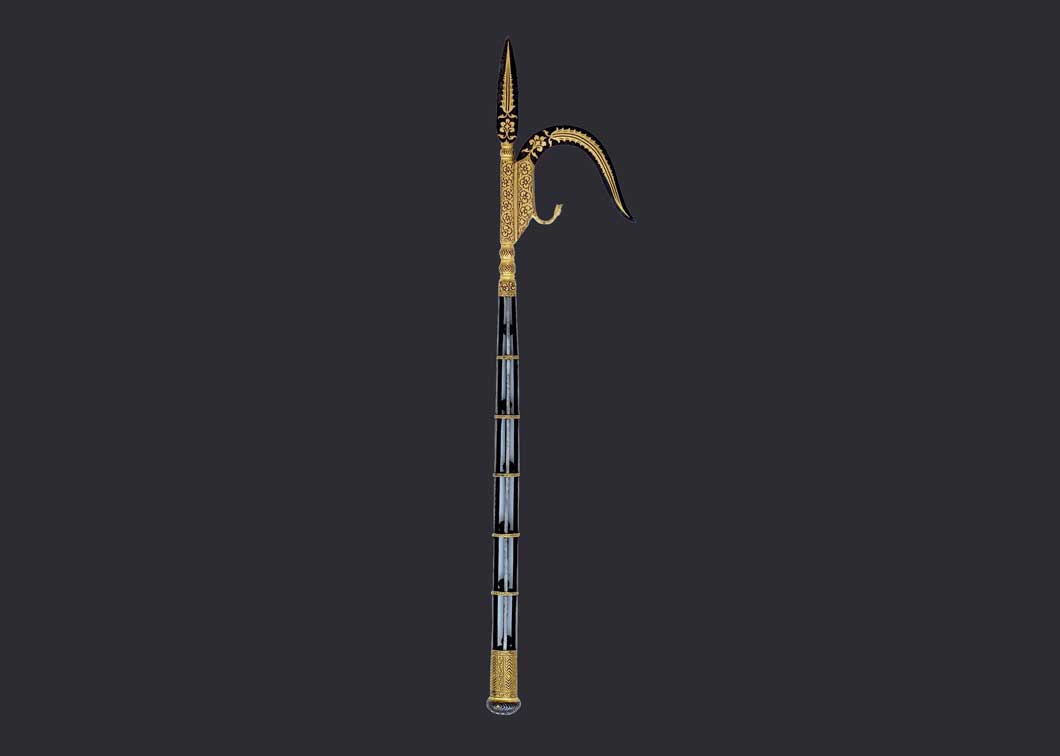 This very light ankush has spherical bells in the haft that roll up and down. The sound they make is thought to drive away evil spirits. The ankush is an ancient implement used from at least the sixth or fifth century BCE. Megasthenese, in the fourth century BCE, described war elephants carrying three armed men and named “a fourth man who carries in his hand the goad where with he guides the animal, much in the same way as the pilot and captain of a ship directs its course with the helm.” 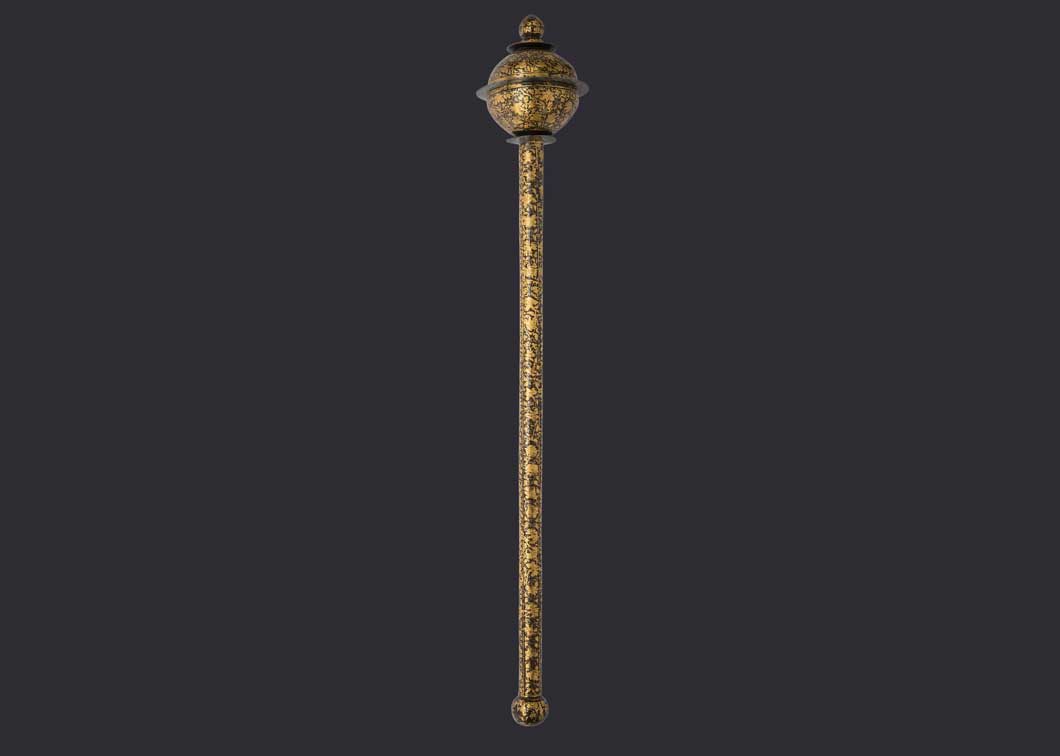 This ball-headed mace features three chakra blades, flat steel rings that circle the mace head. The chakra or quoit is an ancient Indian weapon. Along with the conch shells, it is one of the god Vishnu’s attributes; the chakra relates to the solar disk, while the conch represents the moon. The maharajas were believed to be both gods on earth and earthly representatives of the deity, and many rulers associated themselves with Vishnu. 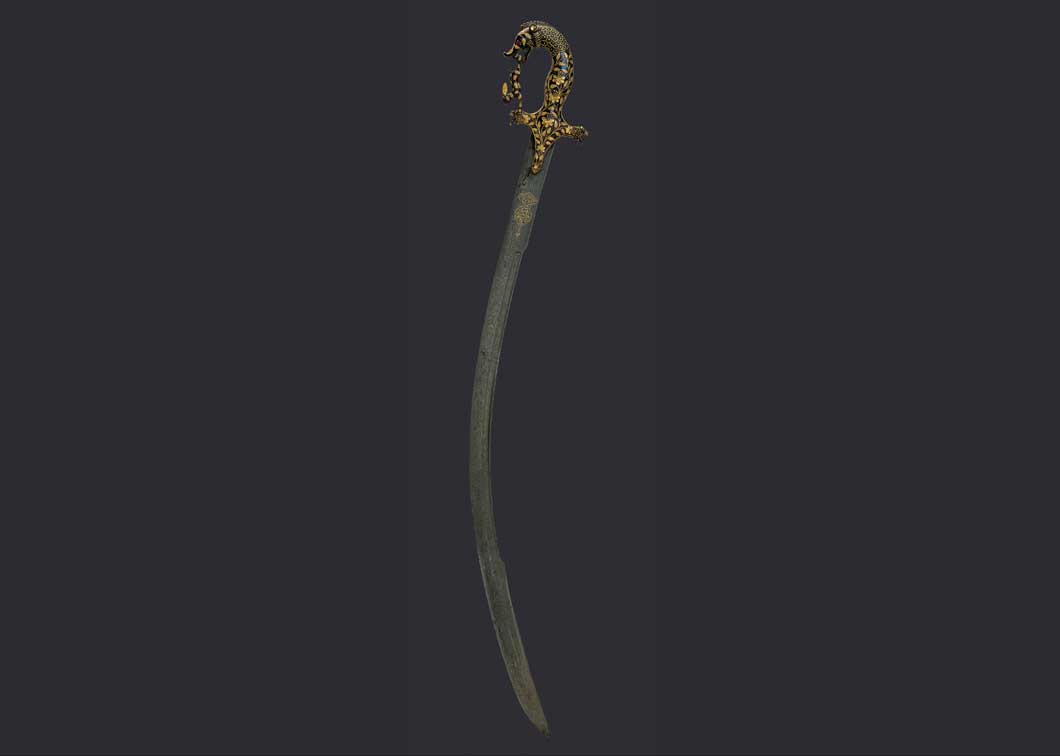 This watered-steel shamshir blade with ricasso and cut-away spine was probably made in Persia for the Indian market. Persian traders developed strong sales in Rajasthan, and mostly unsigned, Persian black watered-steel blades are common from the late nineteenth century. This example, however, has two inscriptions: Bandih-yi vilayat-i Shah ‘Abbas, “Abbas the servant of the King of Holiness,” a Shi’ite line applied to royal swords from the seventeenth century and later widely adopted to give gravitas to commercial blades; and Amal Asad Allah, “Made by Asadullah.” The hilt features a makara, or monster, trying to catch a hare and inlaid flowers.