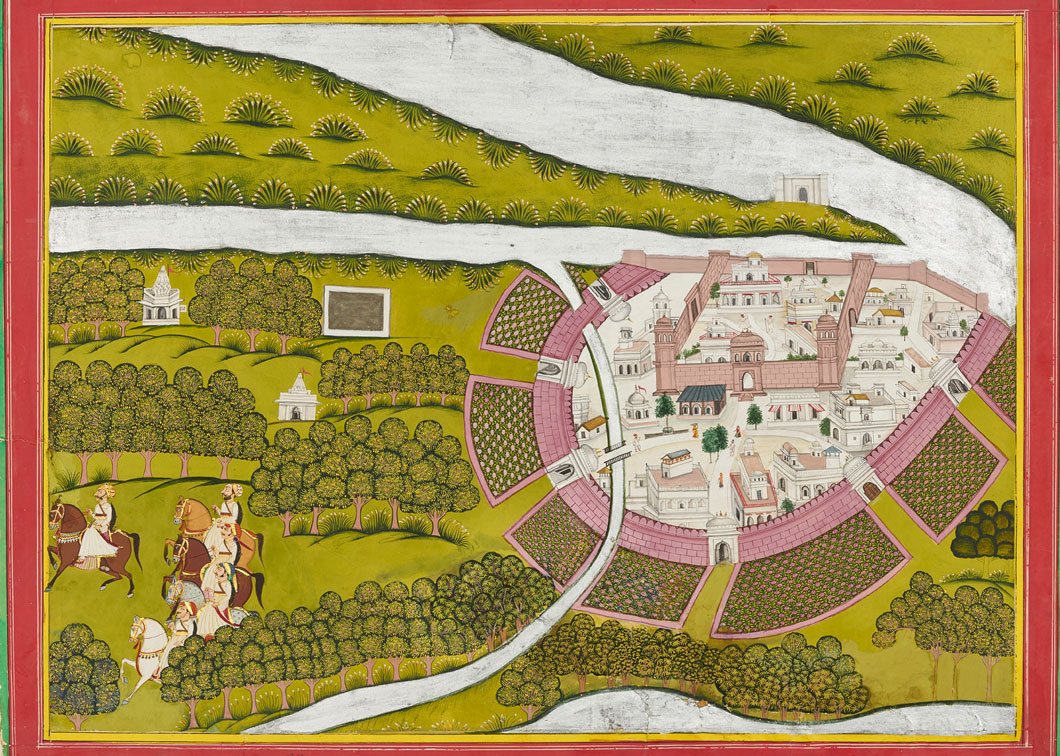 Kannauj, the Ancestral Kingdom of the Rathores, c. 1829

The Rathores trace their ancestral roots to Kannauj, one of the greatest kingdoms of North India. They left Kannauj in 1194 when their ruler, Jayachand, was defeated by the invading armies of Muhammad Ghori. Moving west, the Rathores established themselves in Jodhpur. Commissioned almost seven centuries following the migration, this painting of the city of Kannauj reaffirms the legacy of the Rathores. Using multiple perspectives, the artist has symbolically depicted the walled city on the banks of the river Ganga (Ganges). Horsemen riding away from the city allude to the migration of the Rathores. 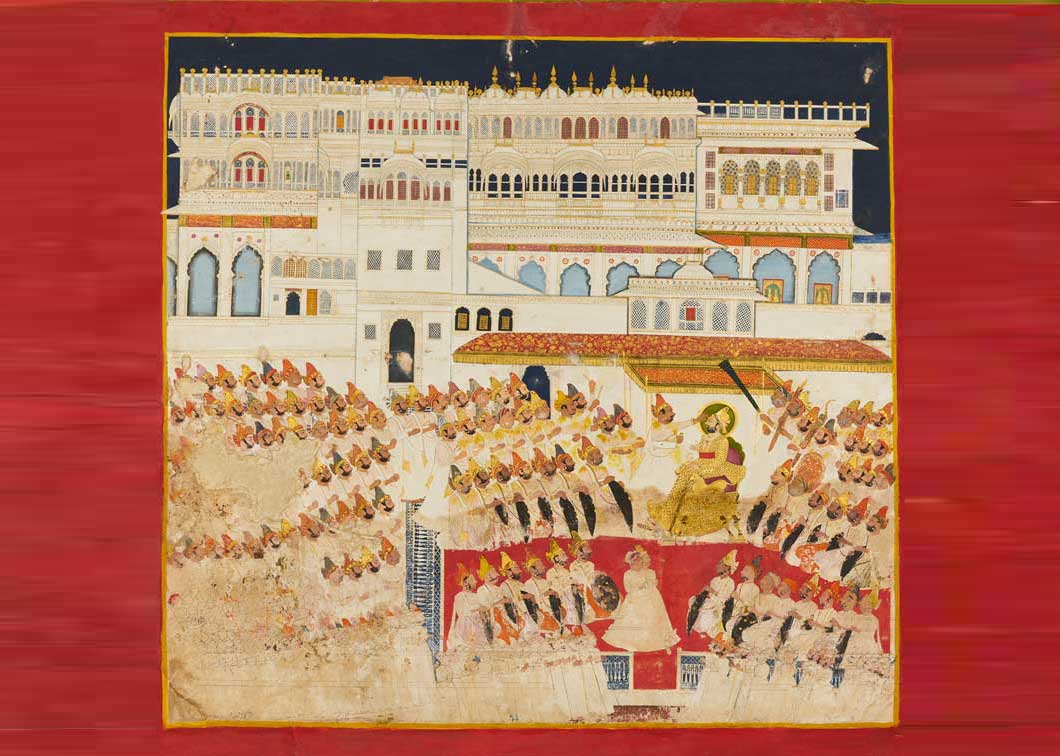 The accession of Maharaja Man Singh was celebrated on January 19, 1804, with a grand public durbar in the Shringar Chowk of Mehrangarh. In the background is the iconic facade of the Ajit Vilas Palace. Amardas Bhatti captures the pivotal moment of the rajtilak, or anointment, by the Thakur of Bagri that proclaimed Man Singh’s sovereignty. Seated on a gold lion-throne, Man Singh is flanked by the most important Rathore nobles. Farther away are members of the second tier who observe the ceremony from a raised platform. The least prominent participants of the durbar, including women, stand in the lower courtyard. 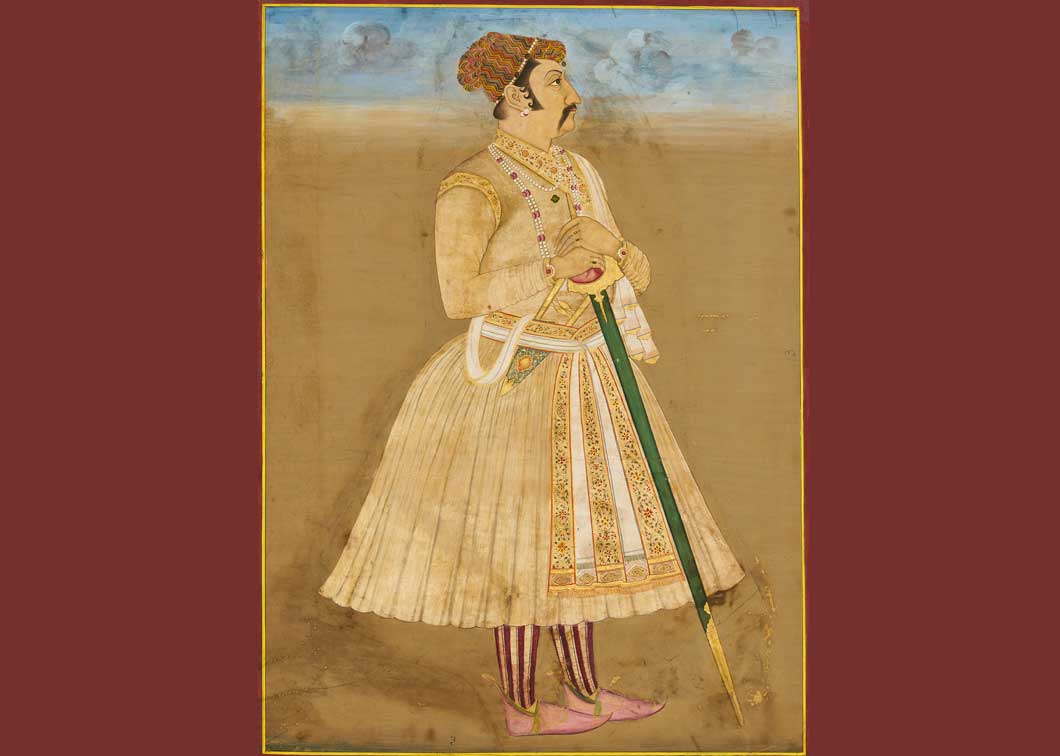 One of the highest-ranking Mughal nobles, Maharaja Gaj Singh I ruled Marwar from 1619 to 1638. He spent a considerable part of his reign in the Deccan on military service under Jahangir and Shah Jahan. A powerful commander, Gaj Singh I led the Mughal forces in a decisive victory against Malik Ambar of Ahmadnagar in 1621. Here, he is portrayed holding the long, straight khanda sword and a jeweled dagger, emphasizing his role as a warrior. Stationed at the provincial Mughal capital of Burhanpur, Gaj Singh I was also pivotal in introducing Deccani arts at the Jodhpur court. 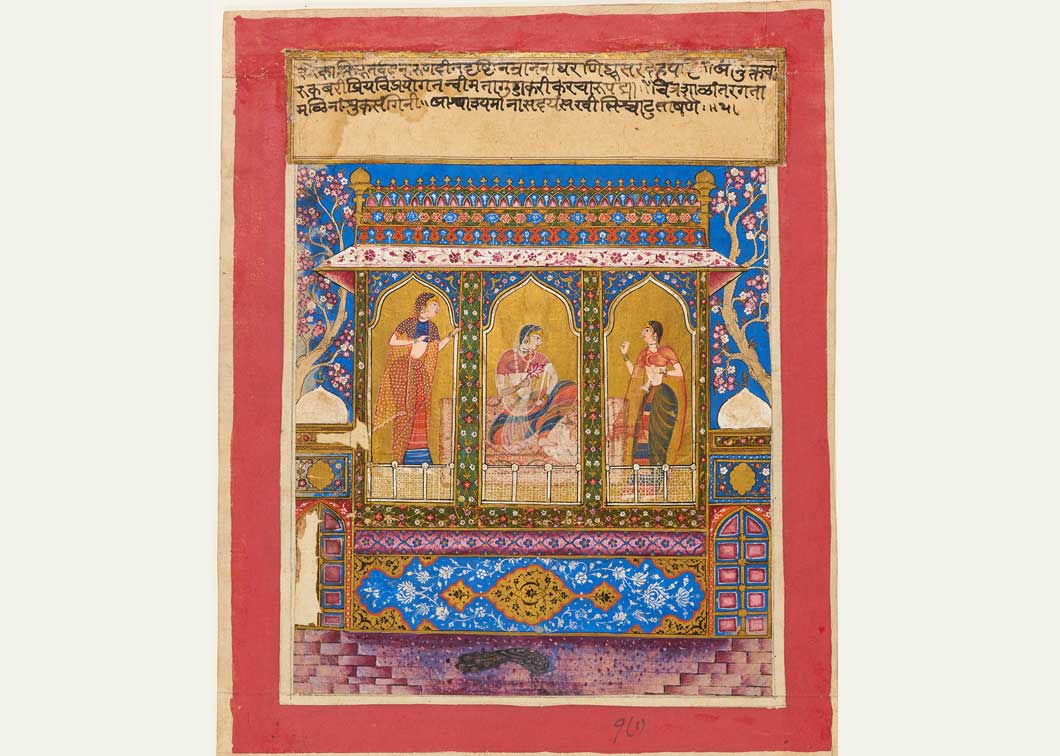 Paintings in a Deccani style, with a distinctive palette of rich blues and mauve-pinks and intricate patterns in arabesque, were patronized by the Rathores during Mughal campaigns in Ahmadnagar and Bijapur. This Ragini Gundakari is from a set of paintings illustrating musical compositions. Called ragamala, or garland of ragas (musical mode), each composition depicts the mood evoked when a raga is sung. Ragini Gundakari is represented by a young maiden awaiting her lover. Collecting lotuses to prepare a bed of flowers, she is surrounded by her sakhis (confidantes). A lone peacock at the bottom symbolizes the heroine’s love and longing.

Offering a rare glimpse into the lives of women, this painting depicts women celebrating the birthday of Maharaja Takhat Singh (r. 1843–73), who observes the gathering from a distant corner on the left. Hierarchy is depicted by proximity from the center. Sharing a single bolster and carpet are the senior most women—the dowager queen-mothers and the patrani (chief-queen). Other members of the zenana are divided to their left and right. Eunuch guards are seated perpendicular to the patrani. The queens and concubines are dressed in ornate clothes and elaborate jewelry, while senior women, probably widows, are in striped or printed cotton skirts with minimal jewelry. 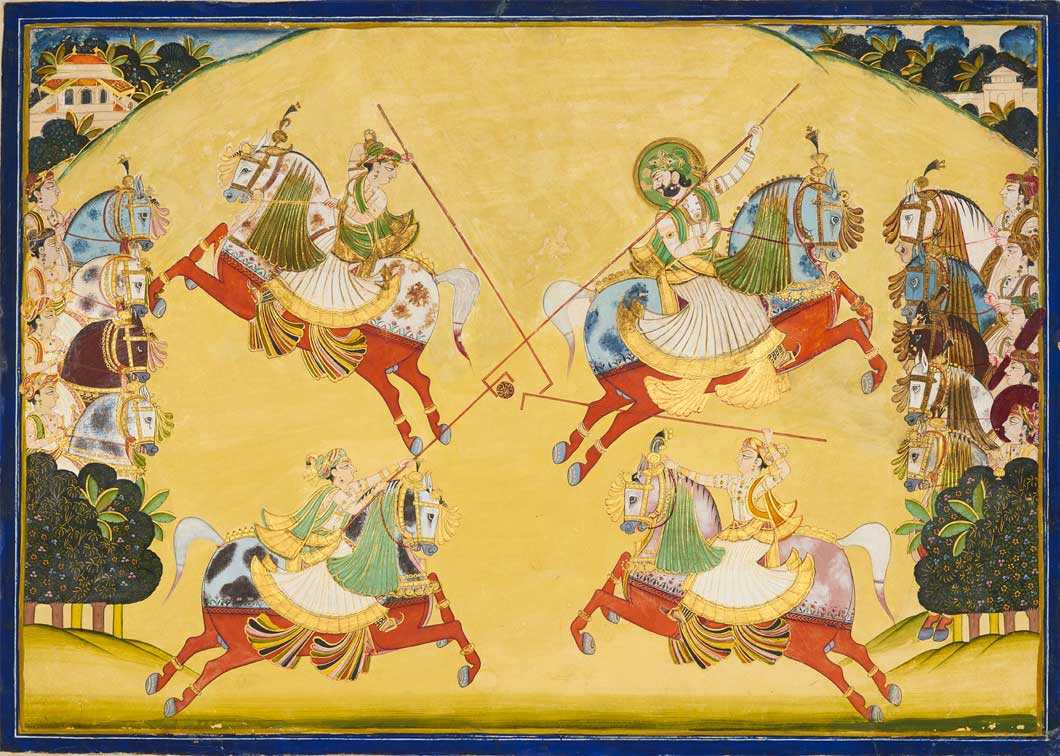 Challenging the idea of Indian royal women living passive, secluded lives, paintings and other records indicate that women actively participated in sports such as hunting and polo.

This painting depicts Jodhpur ladies playing polo with Maharaja Takhat Singh (r. 1843–73). The players ride majestic Marwari horses, identifiable by their distinctive upturned ears. Faced with an unwieldy scene, the artists have elegantly arranged the figures in a circular space; using the polo sticks as a device to achieve symmetrical division of the arena. Within this arrangement, the maharaja is given prominence with a nimbus around his head. 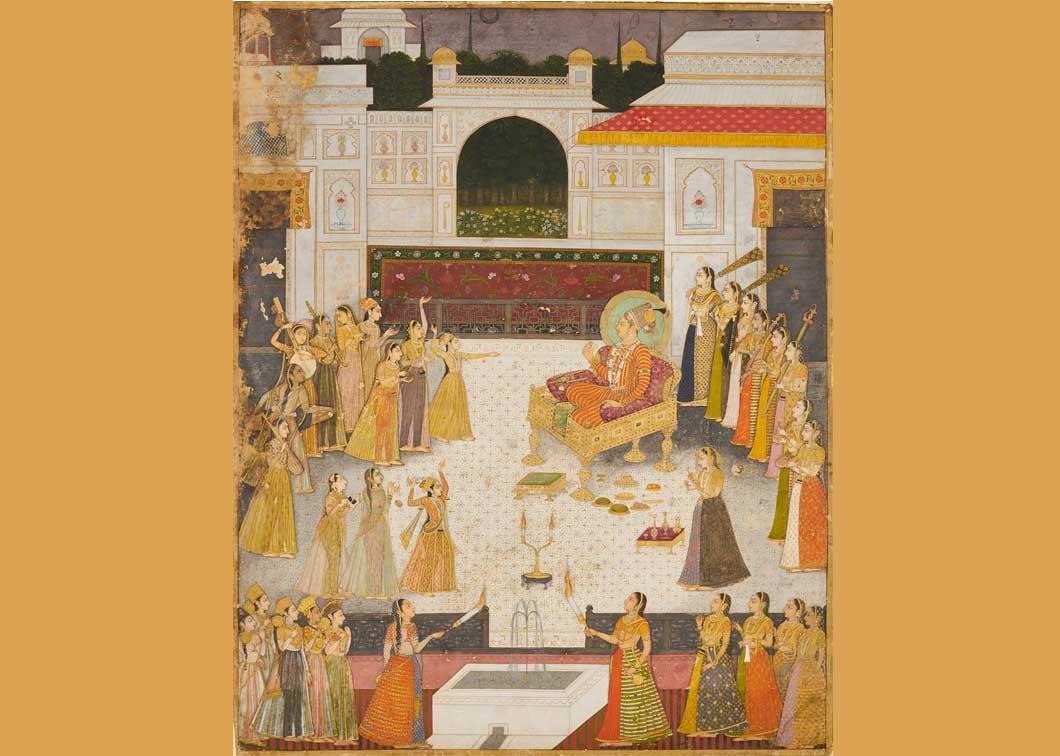 Commissioned by Maharaja Abhai Singh (r. 1724–48) shortly after his accession, this painting captures the grandeur of the Rathore durbar. A troupe of female musicians and dancers perform for the maharaja, who is seated on a jeweled gold throne. As the central subject, Abhai Singh is painted slightly larger than other figures. The mastery of the Mughal artist Dalchand is seen in the delicate portrayal of faces and the attention to detail. He uses white expanses of marble around Abhai Singh in a gentle contrast with the dark garden beyond the pavilion to convey an evening lit by candles 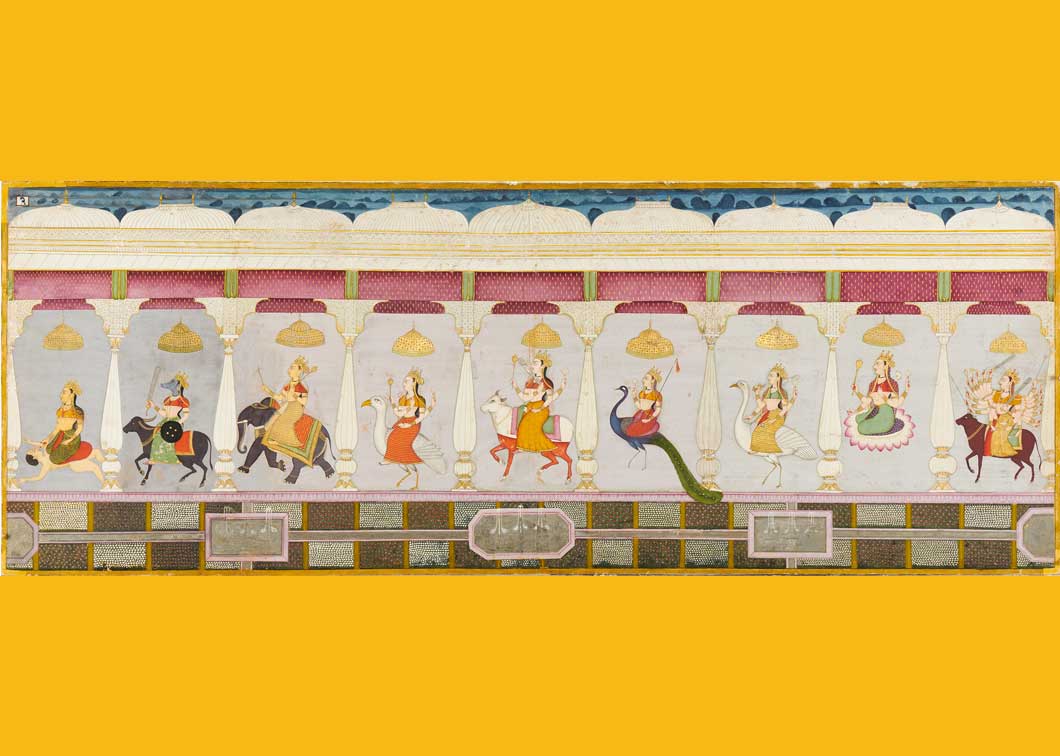 The devotion of the Rathores to the Goddess is expressed in the spectacular manuscript of the Durgacharit (The story of Durga) paintings commissioned in the late 18th century. Worshipped by the Rathores for her prowess as a warrior, the Goddess or Devi is the supreme female divinity of the Hindu canon.

One of the first folios in the series, this page illustrates the various forms of the Devi. Seen from left to right are Chamunda, Varahi, Indrani, Vaishnavi, Maheshwari, Kaumari, Brahmani, Padmasana (one with a lotus seat) and Bees-hattha (one with twenty arms). 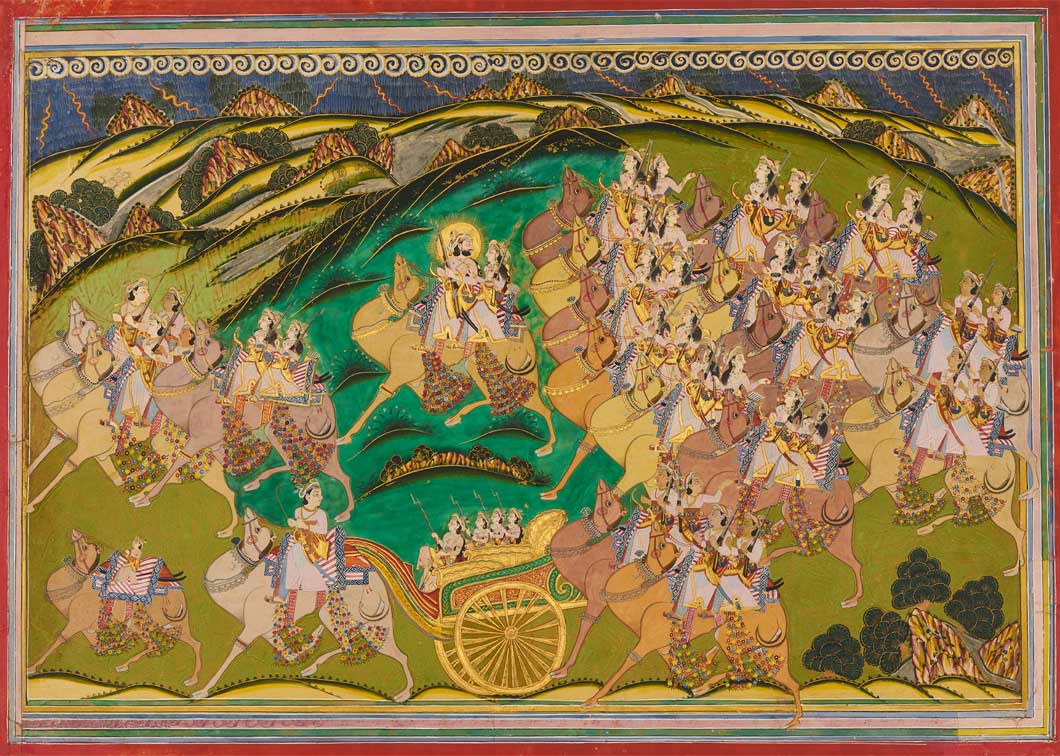 Maharaja Takhat Singh on a Hunt with Royal Women, c. 1853

Hunting was one of the most popular sports among royals, and it was meant to be an affirmation of physical prowess. In this spectacular painting, a hunting party advances during a thunderous evening. At the center of the composition is Maharaja Takhat Singh (r. 1843–73), who is accompanied by his zenana women. Riding camels in the desert countryside, the women are holding toradar guns—matchlocks of a shorter kind that were easier to manage on a camel or horse while hunting. The matchlocks of Takhat Singh and his companions have been equipped with bayonets at the end of the barrel.

Bards or charans were one of the most eminent members of the Jodhpur court. Court poets and guardians of the dynasty’s genealogy, they were regularly rewarded with the highest honors, including gifts of land and cash including the lakhpasav (gifts worth hundred thousand rupees).

Ishwardas was a renowned charan of Maharaja Man Singh (r. 1803-43)’s court and composed devotional works. He was awarded with the coveted hathi siropav (gifts from head to toe) which included an elephant, jewelry and clothes.